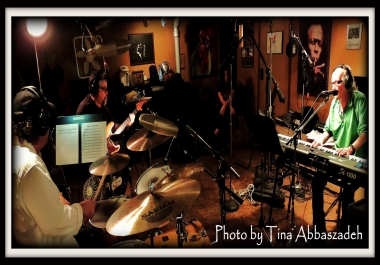 I've worked as a session vocalist on hundreds of recordings since the 1970s, Lead and Background vocals, for national jingles, Feature Film Soundtracks, Tower of Power, 13 solo CDs, including Song of the Year nomination at the 2004 blues Awards, 2007 Emmy Nomination, Song of the Year. I'm using a Neumann TLM 127 as my main vocal mic, with a Universal Audio Tube Preamp outboard gear. I'm also a keyboard, sax player with major label credits, with over 40 years in the recording industry, with many solo CDs and videos available to checkout online. Vocal performance is subject to conditional release, please contact me before making an order, regarding usage.


Music Biographer, David Ritz wrote:
"His voice. Raw. Real. Sweet. Tart. An instrument of tremendous emotional and spiritual range.
His writing. His hooks. His stories. His sense, as he puts it, of "The World As I Know It."
His deep Louisiana roots. His powerful connection to the fertile soil. His grit, his grooves. His honesty.
His haunting cry, his courageous assault on anything false.
His music, his singing, his aesthetic vision are more than good;
they're flat-out great.

At this troubling moment in the history of the Music Nation, John Lee Sanders stands tall. He's major. In his own words, he's hitched a ride from Memphis, dealing with the ghosts of Highway 61, arriving in New Orleans in order to comfort us with the good news: that true music is truer than ever. His songs, full-bodied and blood-washed, are rooted in reality. He reminds us that blues are concerned with neither nostalgia nor self-pity. John Lee Sanders' blues are about nothing less a renewal of strength, a resurrection of the human spirit, a projection of hard-earned hope and a declaration of extravagant love.
Blues, Soul, Gospel, Pop, Country, Celebrity Sound Alikes, Dylan, Sinatra, Elvis, Elton, Willie Nelson, Johnny Cash, John Lee Hooker,

Live Concert with Keith Emerson, of Emerson Lake and Palmer