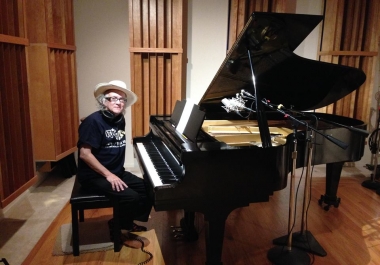 Whether it’s a demo of your original song, or a backing track of a killer song you want to perform live at a special event, I can do a great reproduction of the original track.
Some of my clients are mega-hit Grammy Oscar, Tony, Grammy Golden Globe winning songwriters, such as Songwriters hall of fame, Paul Williams, Steve Dorff, Phil Galdston, “Save the Best for Last” huge hit for Vanessa Williams. One of my favorite co-writers is David Ritz, who co-wrote Sexual Healing with Marvin Gaye.
As a vocalist and vocal arranger, I’ve worked with such “A” list producer/arrangers such as William Ross, music director of the Academy Awards, and composer of blockbusters, Star Wars, and Harry Potter. For many years I was part of the backing rhythm section for the annual Library of Congress in Washington DC, ASCAP sponsored “We Write The Songs” celebrating the best of American Composers, and praised by my performance on vocals, keys, guitar and saxophone, by House Speaker Nancy Pelosi and many other prominent members of House and Senate.
Our Rhythm section included Chris Caswell, Music Director, Will Lee, Bass, James Genus, Bass, Omar Hakim, Drums, Dean Parks, guitar, backing such legendary songwriters as Alan & Marilyn Bergman, Carly Simon, Randy Newman, Donald Fagen of Steely Dan, Bill Withers, and many more.
Depending on the project budget, Prices start with a great piano backing track or full blown arrangement with full live horn section, not sampled, lead and background vocals, live guitars, drum programming, percussion.
Lead vocal is available on requests, authentic styles of Jazz, Blues, Swing, Great American Songbook, Pop, Country, Americana, R&B
Equipment list
Neumann TLM 127 vocal mic
Universal Audio 6176 vocal tube Preamp
Selmer Mark VI Tenor Sax
Buffet Crampon Alto Sax, 18-20
Artley Flute
Fender Stratocaster
Waves Plugins,
Huge Kontakt Sample Library
EastWest Orchestra Composer Cloud
Toontrack, EZDrummer

Lead Sheets from your original song, price varies on complexity and length for $100

Express 48H Backing Tracks! Perfect for Play-Along or Karaoke! for $75